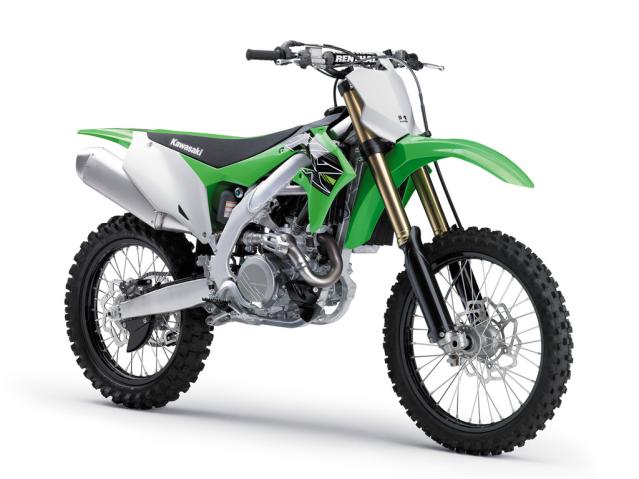 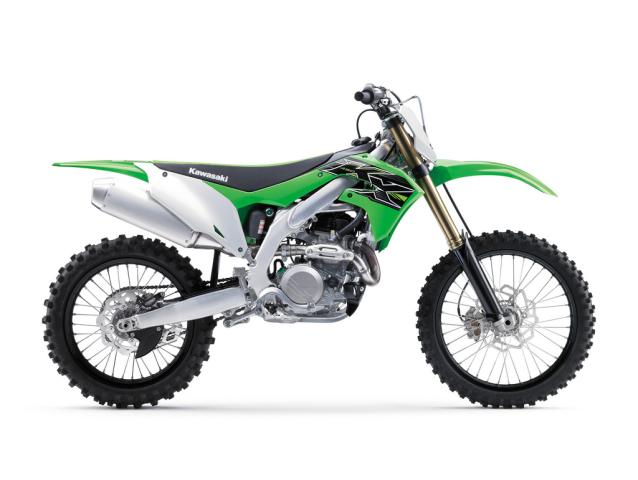 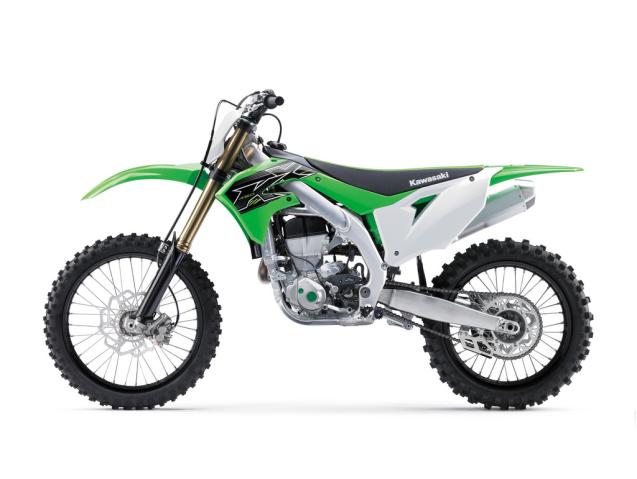 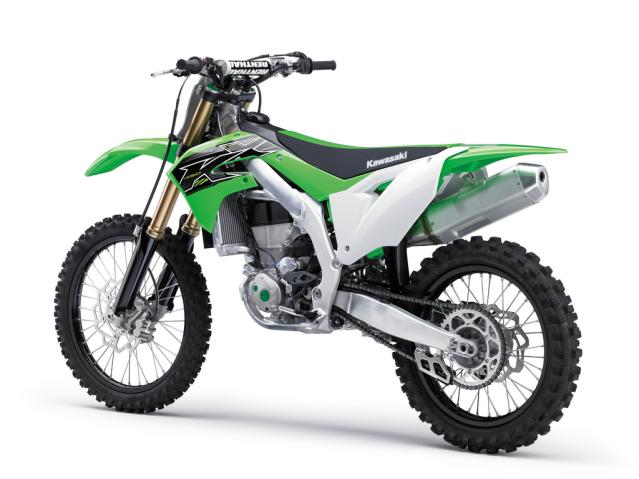 The new engine boasts an increase in peak power of approximately 2.5 kW (3.4 PS), while a flatter torque curve makes it easier to get on the gas. Finger-follower valve actuation (a valve train designed by Kawasaki’s MotoGP & World Superbike engineers) enables larger diameter valves and more aggressive cams. Downdraft style intake and reduced friction loss (care of new plain bearings for the connecting rod big-end) further contribute to the power gains. Being able to restart an engine quickly after a spill can mean the difference between keeping your lead, or having to fight your way back through the pack. Kawasaki’s first electric start on a motocrosser makes restarting the engine as easy as pushing a button. The electric starter is powered by a lightweight lithium ion battery

Kawasaki’s first hydraulic clutch on a motocrosser offers more direct feel and lighter lever action. Less play as the clutch heats up during heavy use results in more consistent feeling.

Complementing the powerful engine, light, nimble handling contributes to the KX450’s quick lap times. While the addition of electric start and the return to a coil-spring fork add weight, efforts were made to keep the weight gain to a minimum. The result is the KX450’s leanest chassis to date, and a highly-competitive, low overall weight of only 110.0 kg – a gain of only 1.3 kg.

Matching the KX450’s increased power, increased front and rear traction ensure the bike can put power to the ground and get around corners quickly. A larger diameter front axle (a hint from our racing teams) helps at the front, while revised rear suspension layout and new linkage ratios benefit the rear.

Being able to restart an engine quickly during a race can mean the difference between keeping your lead, or having to fight your way back through the pack. Kawasaki’s first electric start on a motocrosser makes restarting the engine as easy as pushing a button. Starting is electric only, via a button located on the right grip.

Even for top-level riders, controlling the massive power of a 450cc-class motocrosser off the start requires a high degree of throttle control and clutch finesse. By slightly reducing this power, Launch Control Mode helps riders maximise traction, increasing the chance of getting a good start. Launch Control Mode works in 1st and 2nd gear (and Neutral). Once the rider shifts into 3rd gear, the system is automatically disengaged, switching back to the normal engine map. System designed to the same specifications as that of our AMA factory racers.

Adjusting engine settings to suit conditions has never been easier than with the KX’s DFI couplers. Plug-and-play style system is quick, easy and stress-free.Instead of a single engine map, the ECU features three (four, counting the Launch Control Mode map). Initial settings for the three maps are: Standard, Hard (conditions) and Soft (conditions). Using provided DFI couplers, riders are able to easily switch between the three maps to suit riding conditions. (Plug is conveniently located on the right side of the head pipe for easy access without having to remove any parts.) Maps can now be changed while the engine is running. ECU settings include programming that enhances traction by retarding ignition when the rear wheel speed increases too quickly (i.e. from sudden, excess wheel spin).